'Could have been much, much worse': Ont. ICU doctor recounts experience with COVID-19 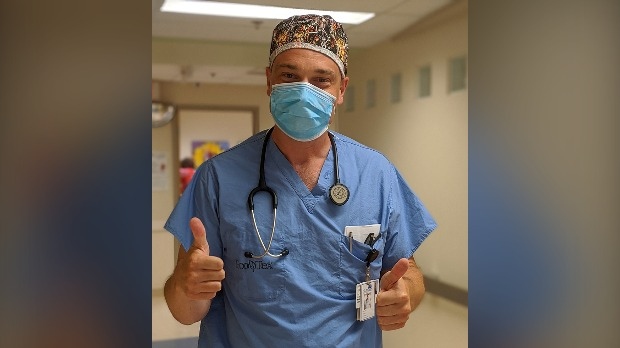 KITCHENER -- The medical director of an Ontario Intensive Care Unit said he still has COVID-19 symptoms more than a month after his self-isolation period ended.

Dr. Paul Hosek, who works at Grand River Hospital in Kitchener, said he still suffers from shortness of breath and has difficulty climbing up two flights of stairs. He also said his sense of smell hasn't completely returned to normal.

"It's gotten better and it could have been much, much worse," he said. "So, I'm grateful for that."

Dr. Hosek said GRH isn't currently using non-ICU bed, but said staff are prepared to do that if they need to in the future.

The second wave of the pandemic has been hitting the health-care system hard, but Dr. Hosek said he feels they're more prepared for more cases of the disease.

"This time around, we know what we're dealing with," he said. "This time we're armed with more knowledge."

"At this point, I don't think we're seeing an end in sight, it's just getting worse and worse," he said. "I hope I'm wrong, but that's certainly what I'm anticipating."

GRH has been taking in patients from harder-hit regions, like Toronto and Peel Region.

"We are always happy to help there," Dr. Hosek said.

Patient transfers are handled on a provincial level through the Ontario Critical Care COVID-19 Command Centre.

Dr. Hosek said, as an ICU doctor, he doesn't do a lot of follow-up with patients once they leave the unit. But, he said he's aware of people reporting symptoms months after they're considered recovered from the disease.

"The good news is it seems that most of these people are getting their function back, it just takes some time," Dr. Hosek said.

"It really corresponds with how severely ill you were in the first place. Those with really severe symptoms probably would experience side effects."

He said he's glad to be back at work and helping people in the ICU.

Dr. Hosek said people need to hang in there during this second wave, along with the stay-at-home order that came into effect last week.

"You can do this and we've got this," he said. "There is an end in store for us and there's a light at the end of the tunnel and don't give up, even if you've got the disease."

He said he's grateful to health-care providers who are working hard during the pandemic, along with the general public who are following restrictions to make sure everyone can return to a normal life.