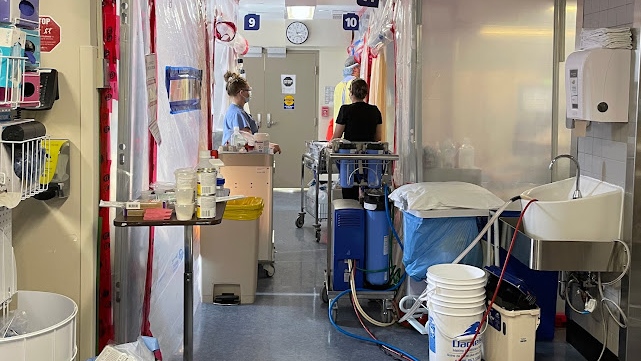 A little over two years ago, a woman in her fifties walked into the emergency department at Grand River Hospital and became Waterloo Region's first case of COVID-19.

“Off the hop we had a report this thick that was built on the experience of SARS, and that gave us our pandemic response that became our bible," said regional chair Karen Redman, in her first sit-down interview with CTV Kitchener since the start of the pandemic, who noted they were given a report more than three inches thick in the early days.

Redman noted quick collaboration with higher levels of government became key as the response to the pandemic evolved.

"When we were being shorted our vaccines and we weren't getting our fair share, I texted the premier. He called me back. I talked to Minister Elliot. We got our vaccines," recalled Redman.

Cutting the red tape during the pandemic has been a process local leaders are hoping to continue.

Dr. Hsiu-Li Wang, the region's top doctor, added that so many people in Waterloo Region have quietly stepped up.

Meanwhile, business leaders have said they're grateful for residents who have shown their support.

"Indigenous, Black, racialized community members, as well as the people that were in low income housing, were being disproportionately impacted by this pandemic in a way that nobody really realized. So again, we recognized it, and we need to address it," said Redman.

Addressing key issues now an important part as Waterloo Region moves into the next phase of the pandemic.

"I think our community spirit will help us through this as we recover from this," said Lauckner.

For now, the region's top doctor is taking a cautiously optimistic approach.

"I'm really happy to see the life come back to our community, to our businesses," added Dr. Wang.

On the eve of International Women's Day, Chair Redman said the pandemic exposed the many incredibly competent woman leaders in Waterloo Region who were "quietly doing incredibly important work."

Lee Fairclough was another woman on Redman's list. Fairclough has been the COVID-19 response lead for Waterloo-Wellington hospitals.

"Lee is an outstanding individual, and such a grounded communicator that makes everything understandable," noted Redman.

Kelly Grindrod was also mentioned by Redman. Grindrod is an associate professor at the University of Waterloo's School of Pharmacy and a key player in the vaccine roll out at local pharmacies.

Redman stressed Fauzia Baig has been integral in reaching out to Waterloo Region's diverse communities during the pandemic.

"It has been the community and much of the work of Fauzia Baig and her colleagues through her Equity, Diversity and Inclusion team to make sure we were doing the right things," said Redman.