KITCHENER -- A Waterloo family says they’re thankful nobody was hurt after a close call with Sunday’s wind storm.

Matt Chandler says a large tree that came crashing down onto his family’s car at their Mary Street home fell on the spot where they had been unloading their vehicle only one hour earlier, after returning from a family cottage trip.

"We had just gotten back from the cottage and we had pulled in right here and had unloaded the car of all our stuff, all our gear and had cleaned out the car and then an hour later, you are reading a story and this is what happens," he said.

Chandler said he was reading to his three-year-old when the storm suddenly picked up.

"Then we heard a massive crash, multiple crashes and it felt like the roof was caving in," Chandler said.

Chandler said he couldn't believe the amount of damage he saw when he rushed outside with his wife and two children. He said they were all grateful that no one was injured.

"You can see he car seats that have been completely crushed," he said. "It's definitely scary, but just thankful to have insurance."

Branches from the tree also crashed into his neighbour's home. 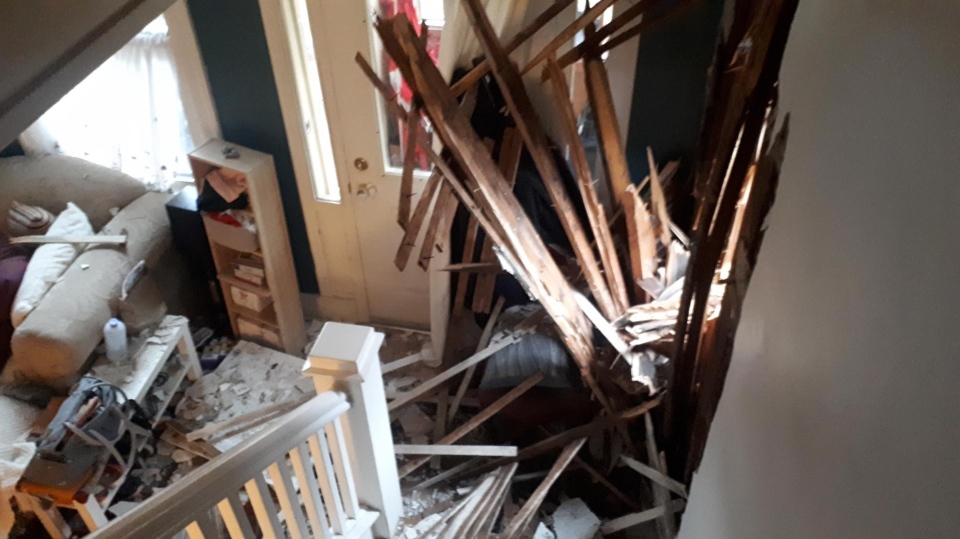 "It all happened very fast," homeowner Sharmalene Mendis-Millard said. "The tree came down, hit their house, hit my house and then crashed through the wall."

It was another unsettling and close encounter.

"Just before the tree came through, I had just been in that area where the wall came crashing through," Mendis-Millard said. "But, because I heard the tree crack, I went outside."

Everyone was shaken up, but no one was injured.

"One of our older cats crawled out from out of the rubble and of course he disappeared for a few hours, but he's safe and sound," Mendis-Millard said.

The damage is extensive, but officials are still calculating an exact financial estimate.

Arborists were removing branches on Monday afternoon. It’s not known how long it will take to repair the damage.