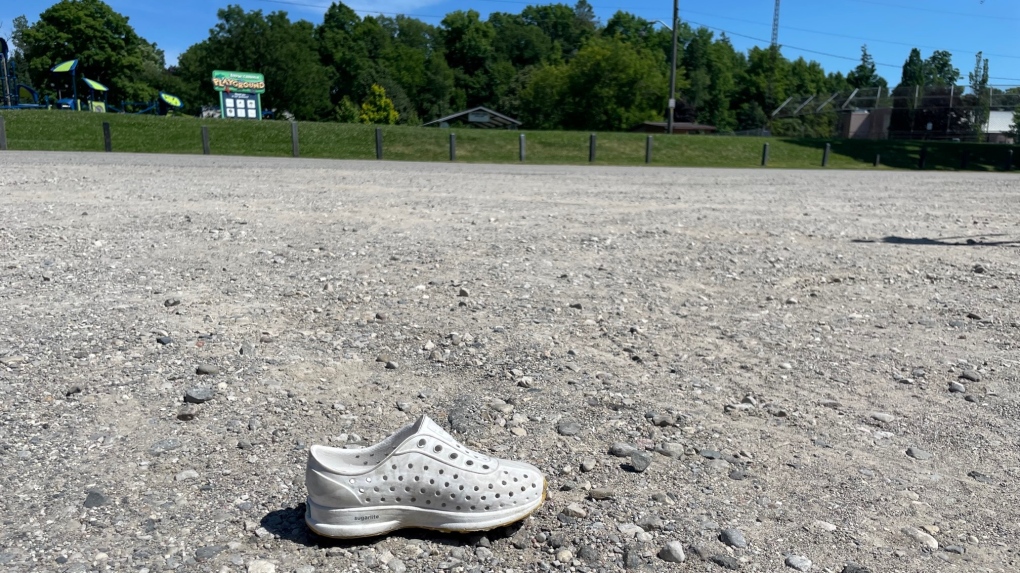 A child’s summer shoe is seen in the area of a collision where a child was struck by a bus. The incident occurred on Centennial Lane which leads to a public parking area for a playground and splash pad. (Sean Irvine/CTV News)

A child has been taken to hospital after being struck by a bus in Ingersoll.

In a video posted to Twitter, OPP Acting Sgt. Ed Sanchuk said it happened shortly before 12 p.m. in a parking lot on Centennial Lane near Wellington Street.

Sanchuk said the child was transported to a local hospital with “undetermined injuries.”

“We’re hoping and praying for a speedy recovery for this young individual,” he said.

Sanchuk said the bus driver remained at the scene and police continue to investigate.

He cautioned drivers to expect “an influx of kids” as the school season comes to an end.

“We need to make sure we have our head on a swivel and always expect the unexpected,” said Sanchuk.

Child struck by bus at Centennial Line in Ingersoll transported to hospital with unknown injuries. #OPP continuing to investigate. Updates to be provided when new info becomes available. #ThankYou to everyone for their assistance today. @OxfordCounty #OxfordOPP ^es pic.twitter.com/ILVRmkV3Al

A new report says Canada needs to change its federal visa policy to speed up the admission of Ukrainian refugees, which has slowed to a trickle.

A group on Prince Edward Island is calling for a return to tougher COVID-19 restrictions in the province.

The last supermoon of the year, known as the 'sturgeon moon,' will rise in the evening sky tonight.

A four-year-old girl who went missing from her home Thursday morning was found wandering on train tracks near a Toronto subway station.

Police in Rio de Janeiro on Wednesday were seeking the arrest of six people accused of involvement in stealing 16 artworks together valued at more than 700 million reais (US$139 million), some of which were recovered.

Making baby food at home with store-bought produce isn't going to reduce the amount of toxic heavy metals in the food your baby eats, according to a new report released exclusively to CNN.