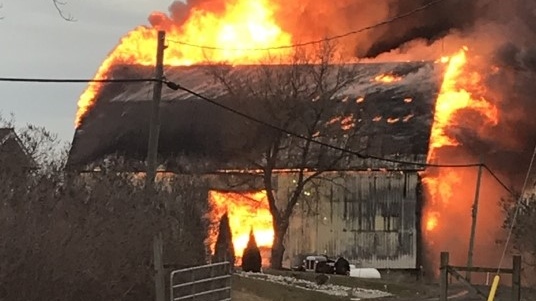 Provincial Police are investigating the cause of a fire that destroyed a barn in Cayuga. (Source: Haldimand County OPP)

KITCHENER -- Damage is estimated at $500,000 from a large fire that swept through a barn in Cayuga on Wednesday afternoon.

Emergency responders were called to the barn at a property on Highway 54 in Cayuga just before 4:30 p.m.

A picture shared by the OPP shows flames shooting high into the air as firefighters battled the inferno.

Haldimand County OPP say the occupants of the barn were able to exit the structure without serious injury.

The cause is not considered suspicious in nature.

“The cause of the fire was a fuel source coming in contact with a hot engine which caused a flash fire, which spread to the barn," Haldimand County’s Emergency Services Chief Jason Gallagher told CTV News late Wednesday evening.

Crews remained on the scene for part of Wednesday evening dealing with the fire and the aftermath, wrapping up their work before 10:00 p.m.

Gallagher says the Ontario Fire Marshal’s Office was notified about the fire but at this point, they will not be attending the scene.

Haldimand Highway 54 in Cayuga was closed between Indiana Road East and Haldimand Road 9 for several hours while emergency crews were on scene.

The roadway has since reopened.