Catholic teachers to work to rule; some high school teachers on one-day strike 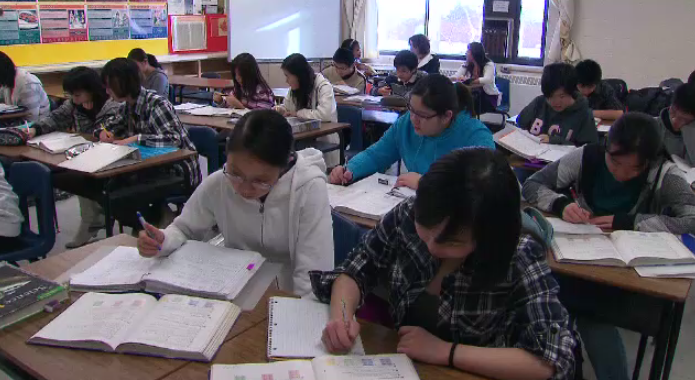 TORONTO -- Ontario's English Catholic teachers say they will be starting an administrative work-to-rule campaign on Monday.

Their announcement comes the same day as high school teachers stage a one-day strike in select boards across the province, the latest in a series of rotating strikes.

The Ontario English Catholic Teachers' Association say they have bargaining dates with the province Thursday and Friday.

But if no deal is reached, OECTA's 45,000 members will start job action on Monday that includes not participating in standardized testing, preparing report cards or participating in Ministry of Education initiatives.

Education Minister Stephen Lecce is set to hold a news conference this morning.

In addition to their rotating strikes, high school teachers have also been on a work-to-rule campaign, as have elementary teachers, amid a contentious round of contract negotiations.

Teachers were angered when the government announced that average high school class sizes would jump from 22 to 28 and four e-learning courses would be mandatory for graduation.

The government has since scaled back those increases, to a 25 class size average and two e-learning courses, but the union says that's not good enough.

Lecce has repeatedly said the key sticking point is compensation, with the union demanding a roughly two-per-cent wage increase, and the government offering one per cent.

All schools will remain open in the Huron-Superior Catholic District School Board, as their OSSTF members are 25 noon-hour aides.

The union, which represents 60,000 teachers and education workers, began one-day walkouts on Dec. 4 with a job action that closed schools across the province. It has followed up with weekly rotating strikes that have closed all secondary schools and some elementary schools at the impacted boards.

In December, a government-appointed mediator called off negotiations between the province and the union saying the parties remained too far apart. No further dates are scheduled.

This report by The Canadian Press was first published Jan. 8, 2020.