A Cambridge man says he was assaulted by a group of men after being attacked by a woman sleeping on his front step.

The incident, which unfolded on Kerr Street in the Galt area of Cambridge around noon on Saturday June 11, was captured on surveillance video.

It’s also under investigation by police.

The footage, taken by Lloyd Leroux’s home security cameras, shows the Cambridge resident walking his dog, Roscoe, when he stops to talk to a woman who appears to be asleep on his front step.

“I asked her ‘are you okay’ a couple times,’” Leroux told CTV News.

“I didn’t get an answer and that’s when she just jumped up at me. That’s when it all started.” 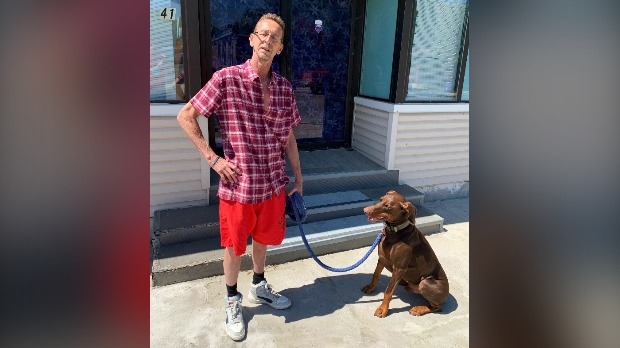 The video appears to show the woman spring up, lunging and swinging at Leroux.

The scuffle then moves out of view of the camera.

Leroux says at that point, the women fell to a seated position and he let her go and backed away. He says at no time did he hit or strike her.

'THEY THOUGHT THEY WERE BEING HEROES'

Leroux says he was yelling for someone to call 9-1-1 when another camera captured a second incident.

The video shows three men in orange construction-style shirts approach Leroux. One of them punches him, and Leroux falls over.

After the punch, one of the other men appears to kick Leroux while he’s on the ground. Leroux says the blow split his ear open. 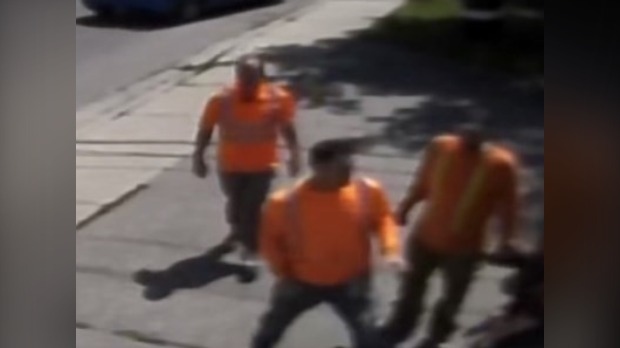 Waterloo regional police have released this photo of three men they are looking to identify after an assault in Cambridge. (Submitted/Waterloo Regional Police Service)

He calls the entire incident confusing and troubling.

“Since this has happened I’m a little bit nervous about the threat of some sort of retaliation,” Leroux says. “It’s been a traumatic experience, that’s what it’s been.”

Police have released a photo of the three men involved and are asking for the public’s help in identifying them.

Const. Melissa Quarrie says bystanders should never take matters in their own hands.

“The first priority is the safety of everyone involved, so if people do witness anything suspicious or assaults… we encourage them to contact police immediately,” Quarrie says.