A Cambridge family says they're fed up with trains constantly idling behind their home, and they believe it's the cause of their headaches and dizziness.

Alix Kompare says a freight train idled on the tracks near her home in Cambridge for close to 50 hours last weekend.

"It's like having a car running in your garage and being in there with it," Kompare said. "It takes our breath away."

While that one eventually moved, she says trains are often idling in the same spot.

The family's main concern is fumes.

"Even if I have my window closed it still comes in a little bit," said Joe Kompare, Alix's son. "For the last two days I’ve been like really dizzy feeling like I have vertigo."

The Kompares say trains often idle overnight as well, for hours at a time, making loud noises every 15 minutes or so. 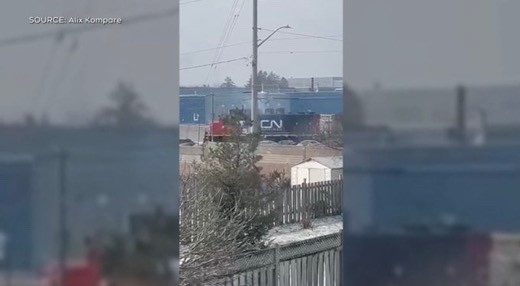 In a statement to CTV News, CN Rail said in part:

"Locomotives are unfortunately not designed to be turned on and off in the same way as a vehicle is. Because locomotive engines use water rather than antifreeze as the coolant, engines cannot be shut down when temperatures may reach 5 degrees Celsius or lower."

"The engines are left idling in order to maintain important safety functions such as engine temperature, air pressure for the brake system, battery power, the electrical system, and to provide heating or cooling for the crew. We apologize for the inconvenience this causes to local residents," CN Rail continued, in part.

Meanwhile Alix Kompare said the family has looked into moving but, "the way costs and rents are right now, it’s very difficult."

The City of Cambridge has its own idling bylaws, but staff say they do not have jurisdiction over federal rail tracks.

When CTV News reached out to Cambridge Member of Parliament, Bryan May, May said said he does deal with railroad complaints and can typically provide assistance, and even possibly talk to the company on behalf of a resident. May and Kompare say they will be connecting to try and resolve the issue.

HOW LONG CAN TRAINS IDLE FOR?

When asked how long a train is allowed to idle for, Transport Canada told CTV News:

“The Locomotive Emissions Regulations state that a locomotives are prohibited from idling for more than 30 minutes unless it is for a stated reason in the regulations, including cold weather operations, to maintain air pressure in the braking system or to maintain heating and cooling in the locomotive cab for occupational health and safety reasons.”

On a section of their Website titled "Living by the railway,” CN Rail states:

“Where possible, many CN locomotives make use of SmartStart technology, which is an Automatic Engine Start Stop system for locomotives.”

CN Rails says half of their fleet has this technology.