KITCHENER -- A Cambridge business owner has apologized after he weighed in on Waterloo Region's transit strike and Ontario's education battle, ending up with a protest.

Transit workers and members of the public high school teachers' union headed to Kevin Zimic's car dealership on Hespeler Road on Thursday morning after he had made the comments on Twitter.

Zimic, who owns Ridgehill Ford, sent the tweet earlier this week, saying that, when it comes to public funding, "it's always about the money." 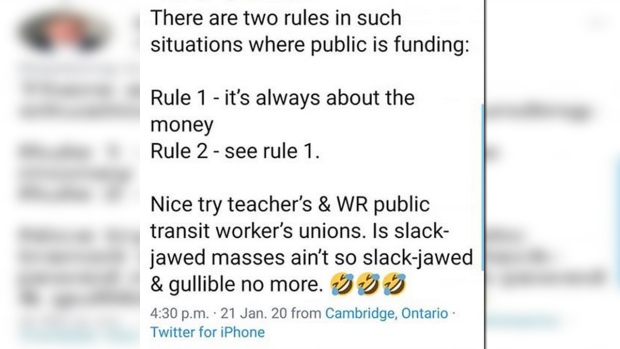 The tweet angered those in both labour disputes: about half a dozen were there on Thursday with picket signs, saying it's not about the money.

"We believe that it was a negative impact on why we're striking," says GRT worker Lisa Hatherley.

Transit workers say that the owner of Ridgehill Ford has apologized to and sat down with union members on Thursday.

He took to Twitter again to make a public apology for his comments. 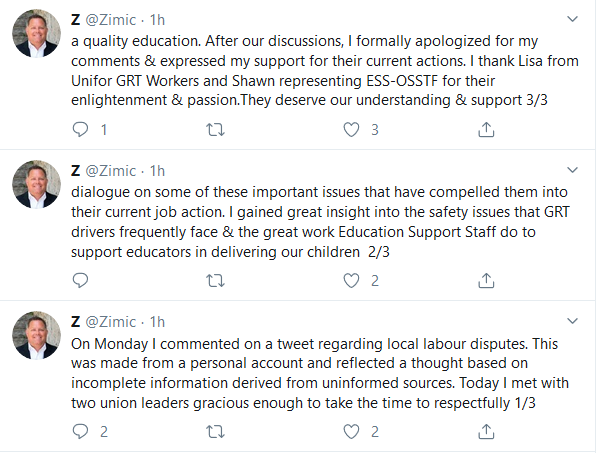 "After our discussions, I formally apologized for my comments (and) expressed my support for their current actions," Zimic says in a tweet.

"I thank Lisa from Unifor GRT Workers and Shawn representing ESS-OSSTF for their enlightenment & passion. They deserve our understanding (and) support."

He says he gained great insight into the issues that the unions are fighting over.