Calgary man sentenced for his role in the death of Sgt. Andrew Harnett 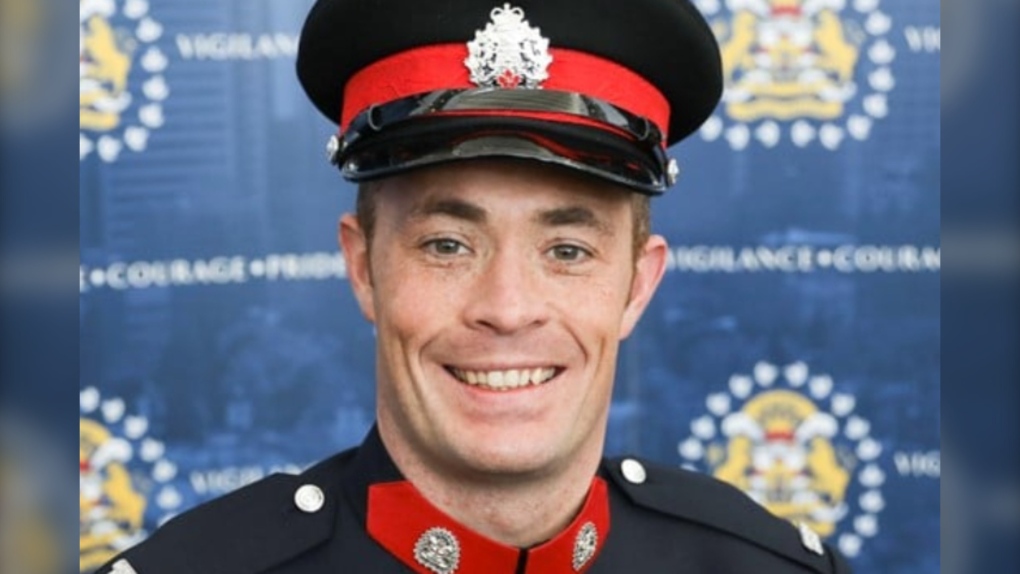 The man who pleaded guilty to manslaughter in the death of a Calgary police officer who grew up in Hagersville, Ont., was sentenced Friday to five years in prison.

On Dec. 31, 2020, Harnett stopped an SUV in the community of Falconridge after noticing its licence plate didn't match the registration. The vehicle took off, dragging the officer 437 metres before he fell off and was left in the path of an oncoming car.

Two other officers tried to revive Harnett but the 37-year-old died an hour later.

Amir Abdulrahman, who was 19-years-old at the time, was a passenger in the SUV. He was originally charged with first-degree murder but in December he pleaded guilty to manslaughter.

Justice Robert Hall sentenced Abdulrahman to five years in prison, stating that he took one year off because of the guilty plea.

After time served, Abdulrahman will spend another three years and five months behind bars.

Hall said that while Abdulrahman wasn't driving the SUV he "still provided assistance to the driver, knowing that they were traveling down a major roadway with oncoming traffic, while a police officer was holding on to the vehicle. The body camera footage shows that he also would have known that the driver was engaged in an ongoing attempt to dislodge the officer from the vehicle."

The driver of the SUV was 17-years-old at the time and cannot be named under the Youth Criminal Justice Act. His trial is set to start on Jan. 31.

The family of Sgt. Andrew Harnett spoke to CTV News just days after his death in 2021.

"He was born to be a police officer and he knew it," said his brother Jason Harnett. "He just had a passion to serve. There was right and wrong, and he really believed in that."

OPP Commissioner Thomas Carrique shared his condolences in the days after Harnett's death, stating: "As I understand it, Andrew was one of the most active Crime Stoppers volunteers we've ever seen in this province."

Harnett's passion for policing also extended to his job at a Canadian Tire where he always kept an eye out for shoplifters.

"He was very proud of not wanting to let anyone just walk out of that store with anything," said Jason.

He added that Harnett's desire to do good continued as he pursued his career.

"Every day he went to Calgary Police trying to make a difference."

Harnett was the youngest of three brothers.

Harnett's widow was pregnant at the time of his death.

In a victim statement to the court she said: "My son's innocence was taken before he was born."

-- With reporting by CTV News Calgary

A chain of events possibly triggered by unrecognized infection with the SARS-CoV-2 coronavirus could be causing the mysterious cases of severe hepatitis reported in hundreds of young children around the world, researchers suggest.

Some are calling attention to a comment about 'Anglo-Saxon words' that Conservative leadership candidate Pierre Poilievre made while appearing as a guest on controversial psychologist Jordan Peterson’s podcast. The term has been used by those on the far-right to differentiate white people from immigrants and people of colour.

Montreal has 17 suspected monkeypox cases; officials say it's 'not highly contagious' or severe

Montreal Public Health said they're asking health workers to be alert for monkeypox cases but said the illness is also not extremely contagious and is the milder of two strains. There are 17 suspected cases in the Montreal area.

Jason Kenney steps down after 51.4 per cent approval in leadership review

Jason Kenney quit as leader of his party, and premier of Alberta, Wednesday night after receiving a slight majority of support in his United Conservative Party leadership review.

Prince Charles and Camilla, Duchess of Cornwall, are spending the final day of the royal visit in Canada's North.

In a world beset by conflicts and natural disasters, the number of people who fled their homes and sought shelter within their own countries hit a record high of close to 60 million by the end of last year, according to new data.

Desperate U.S. families turn to hospitals when their hunt for formula comes up dry

The baby formula shortage in the United States has meant major stress, inconvenience, and expense for millions of families, but for some children, the hunt for formula has led to the hospital when their families can't consistently find the kind they need.

What options do sellers have now that the housing market is cooling down?

In what is increasingly becoming a buyer's market, some soon-to-be sellers may be wondering whether to delay listing their homes until conditions become more favourable. Here's a look at one realtor's advice on the best time to sell.

A memorial service will be held at the Royal Military College in Kingston, Ont. this evening to remember the four cadets who were killed when their vehicle went into the water last month.