The meat belonged to Ilija Bilogrovic, who has operated B & R Farms since 2001.

His issues with Ontario’s Ministry of Agriculture, Food and Rural Affairs began in 2012, when inspectors noticed that he was using a wood smoker, instead of the required stainless steel smoker hooked up to a natural gas line, and told him he needed a new smoker. According to Bilogrovic, even a used steel smoker carries a price tag of at least $80,000.

OMAFRA returned to his business last December, having learned that B & R was no longer registered as a food premises and therefore had not been subject to any health inspections since early 2015.

“They found the meat … and they closed the store,” he says.

An OMAFRA spokesperson declined to be interviewed for this story but did provide a statement outlining the ministry’s position and a copy of the decision from the hearing regarding Bilogrovic’s case.

According to the hearing documents, Bilogrovic was twice found to have been making smoked meat without a licence. After the first time, he signed a paper declaring that he would not perform any regulated activities without proper licences.

Bilogrovic argued that he didn’t know he needed a licence, and believed Waterloo Region’s public health inspectors would have warned him if he was acting wrongly. (Local inspections focused only on the retail arm of the business, which they say provided “generally satisfactory” results, and not on the manufacturing side.)

In the end, the ministry determined that the lack of regulatory food safety oversight and issues with increasing coliform bacteria levels in the butcher shop’s water supply meant that consuming food made at B & R Farms would represent an unacceptable public health risk.

“Any detained products should be prevented from being consumed by the general public,” the decision reads.

The ministry also found that allowing Bilogrovic to keep all his meat for personal use was not credible, in part because he offered to have his customers sign a petition on his behalf – something which suggested to the ministry that those customers might still be interested in getting some of that meat for themselves.

Instead, the ministry agreed to let Bilogrovic keep 90 kilograms of meat for personal use. The rest was marked to be destroyed, and an OMAFRA worker showed up Tuesday to ensure that happened. 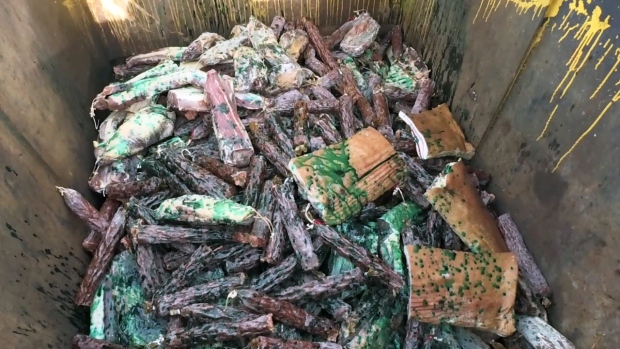 Bilogrovic says he asked if the meat could be donated to a food bank instead of being destroyed and was told it could not.

“People need something to eat, so why’s this going in the garbage?”

A ministry spokesperson says the decision comes down to protecting people from the potential danger of food from an uninspected manufacturer.

“All meat sold or distributed in Ontario must come from an inspected source,” the spokesperson said.

Since the December inspection, Bilogrovic has closed his business. He told the ministry that he had been planning to retire this spring regardless.

“I feel terrible,” he says.

“Me and my wife spent many hours preparing the food … and now, when everything is done, ready to go out, ready to be sold, we have to throw everything in the garbage.”

Bilogrovic isn’t the only local butcher to give up on smoking meat after deeming OMAFRA’s regulations are too stringent to follow.

Krug’s Meat Market in Tavistock has decided to stop producing smoked and cured meats. Owner Bob Jantzi says the shop has decided to withdraw from OMAFRA’s oversight altogether, meaning they will not be legally able to smoke or cure.

“We’re going to be allowed to sell what we’ve already produced … but we won’t be making any new products,” he says.

“The stuff we’ve made for years and years is a great quality product, and now it’s not going to be available anymore.”

Jantzi will continue to operate the store, and has found a supplier for replacement smoked and cured meats.

He says he understands and appreciates OMAFRA’s commitment to food safety. His issue isn’t with the regulations themselves – it’s that the physical layout of the store makes it impossible to meet them any longer.

Other butcher shops are finding other ways to deal with the increasing regulatory burden. Charles Quality Meats opened a retail location in Waterloo last fall. Co-owner Tony Lobrutto says expansion beyond farmers’ markets was necessary after regulatory changes necessitated $10,000 worth of renovations to their farm.

With reporting by Daryl Morris and Heather Senoran