Earlier this year, a so called ‘burn book’ surfaced a Waterloo-Oxford high school taking bullying to another level.

The phrase “burn book” comes from the movie Mean Girls, which featured a book containing a series of hateful comments about fellow peers, shared and circulated around the school.

The incident happened on Jan. 19, at Waterloo-Oxford District Secondary School. The issue seems to have re-surfaced after a student sent CTV News Kitchener a photo of a page.

One side of the page shows hateful 'commandments' written out and the other shows a list of names those ‘rules’ apply to. 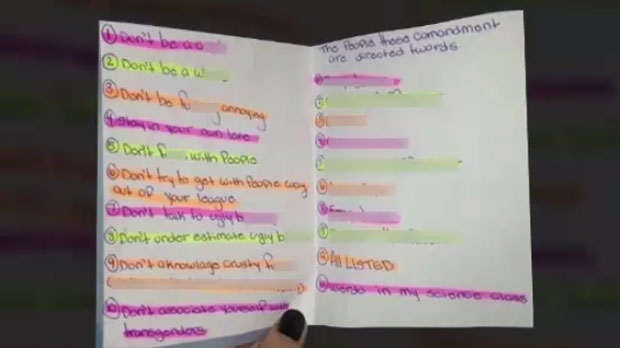 "The post we saw in this case was shocking and saddening, and we know none of our students want to see this kind of thing," said Nick Manning, a spokesperson for the Waterloo District School Board.

A photo of the page was posted on an Instagram account that Manning says has since been removed. He said the paper has been destroyed and school staff continues to deal with the situation.

Manning said the student who wrote the list has been punished and each student who was named has also been spoken to.

One student said school staff has not made any recent statements or announcements about bullying since the burn book surfaced on Jan. 19.

Staff, students and the school board hope this incident is the last of its kind.