Bulldog stolen in break-and-enter from farm in North Perth 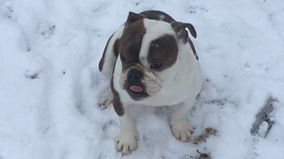 Police say this dog was stolen from a farm in North Perth (Supplied: OPP)

KITCHENER -- The OPP says a bulldog worth $3,500 was stolen during a break-and-enter in North Perth earlier this month.

Officers were called to a barn at a residence on Line 71 in North Perth on Aug. 1. Police say the break-in happened between 7:30 and 8 a.m.

According to officials, a man drove onto the property in a dark green pickup truck, went into the barn and stole the one-year-old female English Bulldog,

The dog is white with brown spots, police say,