Police in Guelph, Waterloo region and Brantford are sounding the alarm after a string of thefts targeting Dodge Ram pickup trucks.

At least four vehicles were stolen just last night. Three were taken from addresses in Cambridge’s Hespeler area. Police say thieves used “relay and reprogramming technology” – tools that allow them to get inside and reprogram blank key fobs. One was stolen from the area of Clair Road East and Gordon Street in Guelph.

Guelph police say at least 10 Dodge Rams have been stolen in that city since Nov. 25.

One of them was Leanne Stalker’s. The theft was captured on a home security camera, showing how simple and quick it is for tech-savvy thieves to drive off with a vehicle.

“Just so smooth so professional, so organized, they're obviously scoping out properties,” Stalker said.

It took thieves less than two minutes to make off with her truck.

“It’s one of those things that you see it happen and you think it’s not going to happen to you,” she said.

Now she wants Dodge to take a better look at potential faults in its technology.

She said she’s been victim-blamed for not having better security but “just doesn’t see how that’s the owner’s fault.”

“I should not be responsible for dealing with a known fault and I really think Dodge needs to step up to the plate,” she said. 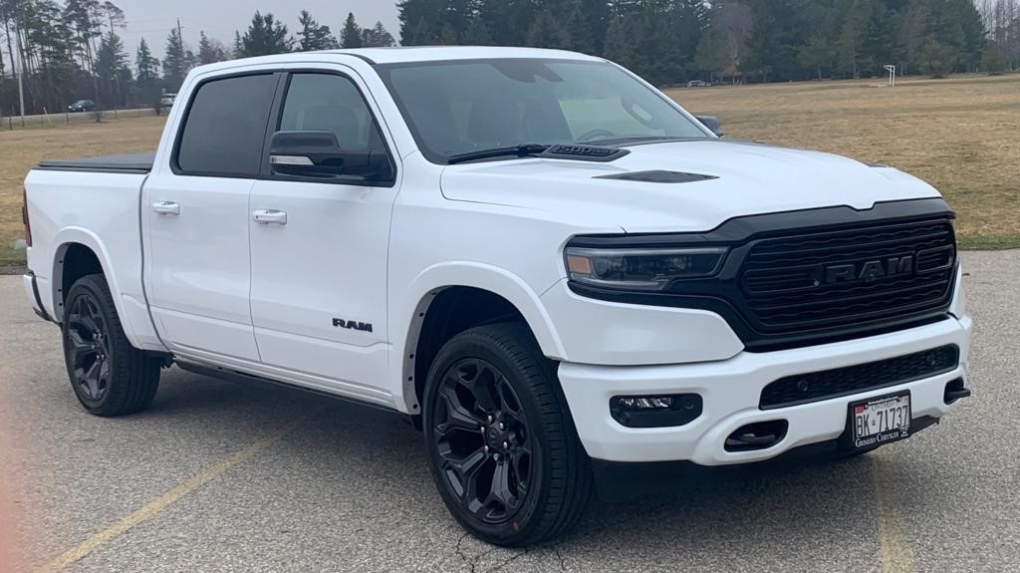 Leanne Stalker's Dodge Ram pickup truck (pictured here) was stolen from her driveway in Guelph this week, it's one of at least 10 thefts targeting the same make and model in the past two weeks in Guelph. (Submitted)

Brantford police say all of the vehicle were newer models with keyless entry and push-to-start ignitions.

“A lot of the times we will suggest something like a kill switch, something that will interrupt the flow of electricity to the starter engine, where someone can't get it started if someone tries to recode, or steals the keys,” said Michael Shicoyone at Powerline Electronics.

There are two main types of kill switches, with the most popular being the short range. Bigger alarm systems are gaining popularity too.

“An alarm system will have it’s own kill switch built in so when you activate it at night, not only do you kill the starter motor, but you’re also setting an alarm so you have a siren, horn, lights, all that kind of stuff to hopefully scare somebody before they get a chance.”

Thanks to a GPS tracker, Stalker’s Ram was recovered about 12 hours later in Montreal. She’ll soon have her truck back, but not her sense of security.

“It's just a very uncomfortable feeling to know that your personal property isn’t safe, especially in a moderately small city, like Guelph,” Stalker said.

The thieves will approach a residence and use a device to amplify and transfer the key fob signal from inside. That allows them to unlock the vehicle, and once inside, they can access the diagnostics and reprogram a blank key fob which allows them to start and steal the car.

Car owners typically don’t even know the thefts have happened until the next morning.

Residents are also asked to report any suspicious people seen looking into vehicles to police or Crime Stoppers.

At first, Juan Delgado agreed to spend 24 hours inside a Dundas St. Denny’s as a consequence of losing in his fantasy football league.

A Vancouver Island man is awaiting possible extradition to the United States on charges of sexual assault against his 13-year-old stepdaughter.

A new artificial intelligence algorithm created by a Toronto student is helping researchers search the stars for signs of life.