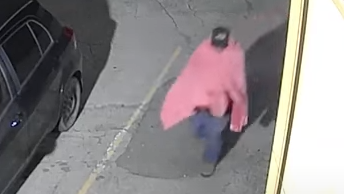 Brantford police are looking to identify this individual. (BPS/YouTube)

The Brantford Police Service has released a video in hopes of identifying a suspect in an Oct. 3 arson.

On Monday, police released a roughly three-minute video of what appears to be surveillance footage. The footage is timestamped for Oct. 3 just after 4:15 a.m.

Police said the arson occurred in the area of Market Street and Sheridan Street where a small shed at the rear of a building was deliberately set on fire.

The video shows an individual with what appears to be a pink blanket draped over themselves enter the frame at 4:19 a.m. and rummage around in some bushes.

Less than 30 seconds later, the same person appears to jog toward the building and out of frame.

Within two minutes, an orange glow and smoke can be seen coming from the bottom of the frame.

According to police, the fire was quickly controlled by the Brantford Fire Department, however, property damage occurred.

Anyone who may have information which would assist investigators to identify this individual is asked to contact Detective Ryan Groen of the Brantford Police Service at 519-756-7050 ext. 2206.