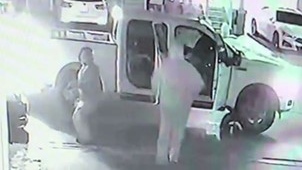 Brantford police have released images of persons of interest in connection to a series of vehicle fires and property damage incidents from the past three months.

Emergency crews were first called to a vehicle fire outside a home on Bisset Avenue around 6:15 a.m. on Aug. 29. The fire was quickly put out and is being considered suspicious.

On Sept. 21 around 12:30 a.m., officers responded to reports of rocks being thrown through windows at a home on Bisset Avenue.

This past Friday around 2 a.m., emergency crews were called to another vehicle fire outside a home on Gillepsie Drive. This fire is also being considered suspicious.

No one was physically hurt from the incidents.

In a Monday news release, Brantford police released images taken from nearby surveillance they say captured a person or people of interest.

Anyone able to identify those in the images, or who has information about the incidents, is asked to contact Brantford Police Service.