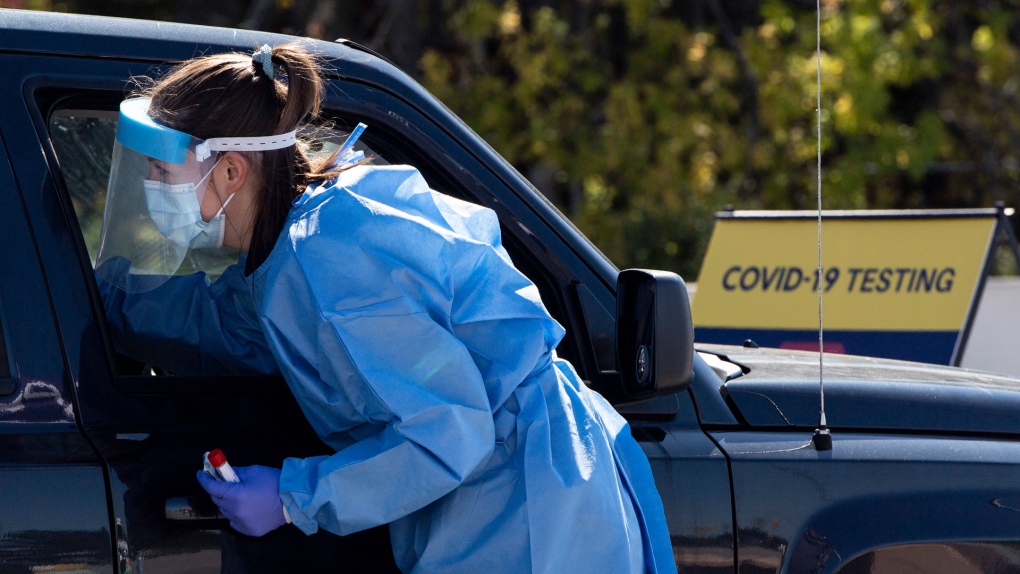 A paramedic reaches into a vehicle window to administer a nasal swab test at a drive through, pop-up COVID-19 test centre outside the Canadian Tire Centre, home of the NHL's Ottawa Senators, in Ottawa, Sunday, Sept. 20, 2020. THE CANADIAN PRESS/Justin Tang

KITCHENER -- Region of Waterloo Public Health reported 70 new cases of COVID-19 on Thursday, marking the second day in a row of 70 or more cases.

Thursday's update brings the total number of cases to 3,287, up from the 3,217 reported the day before. That number includes 2,728 resolved cases and 124 deaths.

There are now 433 active cases in Waterloo Region. Of those, 26 people are in hospital, including 10 in the intensive care unit.

The latest outbreaks were declared at a congregate setting and at St. Bernadette Catholic Elementary School in Kitchener. At the former, there was one case of the disease identified, while the school had two cases.

You can track every case of COVID-19 in publicly funded schools online with our interactive case tracker.

The province saw nearly 1,500 new cases of COVID-19 on Thursday after the numbers at the start of the week were derailed by a technical issue.

Health officials also reported 21 new deaths, a slight drop compared to the 35 deaths reported on Wednesday. That was the highest number of deaths reported in one day since the second wave began in mid-September.

This is a developing story. Check back for more details.

Defiance of church near Steinbach, Man., coming at a cost to neighbouring church

Canadians age 85 and older account for over half of excess deaths amid COVID-19: StatCan

ICU doctor's COVID-19 warning: 'This is what you'll see at the end of your life'