As police try to track down the man believed to have paved a Puslinch woman’s driveway without her permission, another person has come forward claiming to be the victim of a similar alleged fraud.

Josh Tritt of Cambridge says on June 1, he was approached by a company that said they could redo his driveway the next day.

“They gave me a quote and I said OK, let’s go ahead,” Tritt told CTV News.

Instead of the next day, Tritt came home around 9 p.m. that night to find work had already begun.

He hoped everything was going to be okay, but that optimism soon faded.

He says it was dark and he couldn’t really tell what was going on but “by the time I could get to talk to anybody, everybody started jumping in their trucks and leaving.”

Tritt says the crew put the asphalt directly over old dirt, grass, and gravel – something those in the paving industry say is highly problematic. 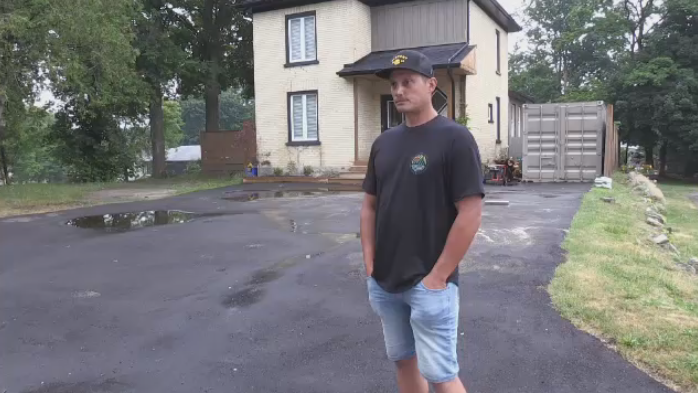 Water can be seen pooling on Josh Tritt's driveway as he speaks to CTV News. (Jeff Pickel/CTV Kitchener)

“You can’t do it like that, it would be gone in a year,” says Graeme O’Brien of O’Brien Paving. “After one winter it would be destroyed.”

O’Brien says typically, 14 inches of soil have to be removed and a foot of gravel laid before asphalt can be compacted on top to form the driveway.

On Tritt’s driveway, weeds can be seen growing through the pavement.

The day after the paving, Tritt says he was able to speak to someone with the company who said they would be back to take a look.

They never came and all other calls went straight to voicemail. 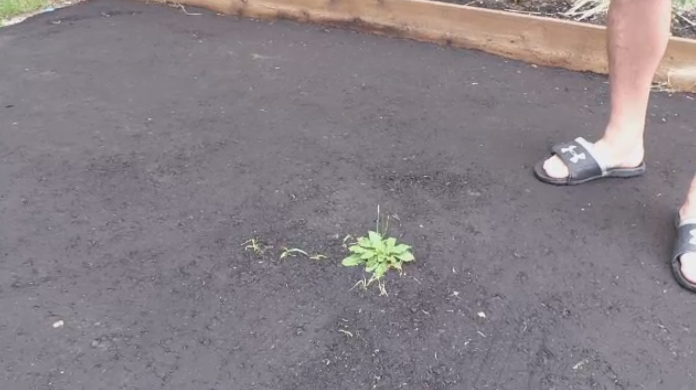 Tritt’s situation is similar to an incident at another home about five minutes away. On nearby Ellis Road, a woman was approached by a paving company about work on her driveway.

She says she said no, only to find them repaving her driveway the next day – and asking for over $7,000 dollars for the job.

The incident has been reported to police, and the OPP say they’re looking to speak to a man only known as ‘Peter’ associated with Unique Masonry and Paving. 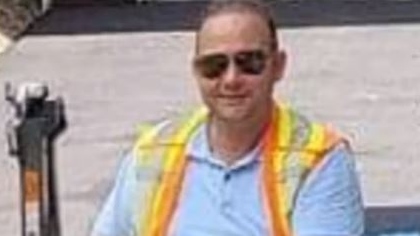 A photo of man, who went by the name "Peter," who police want to talk to about an unwanted paving incident. (Courtesy: OPP)

The crew Tritt hired went by a different name, but he noted several similarities.

“They were Irish, nice decent guys,” he says.

Tritt says the whole ordeal has been costly. He estimates it’s going to cost him $5,000 alone to remove what has been installed.

“There’s nothing that can be used here,” he says.

As a contractor himself, Tritt says he should have known better.

“I should’ve noticed when they came in at 9 o’clock at night something was up,” he says. “But I was just pumped to get the driveway started and going in. I did not think it was going to turn out this way.”

According to industry experts, going door to door and promising next day installation should be a red flag.

“Most companies are booked up for the year,” says O’Brien. “So if someone says they can do your driveway the next day, or in a week, you probably don’t want them doing it.”