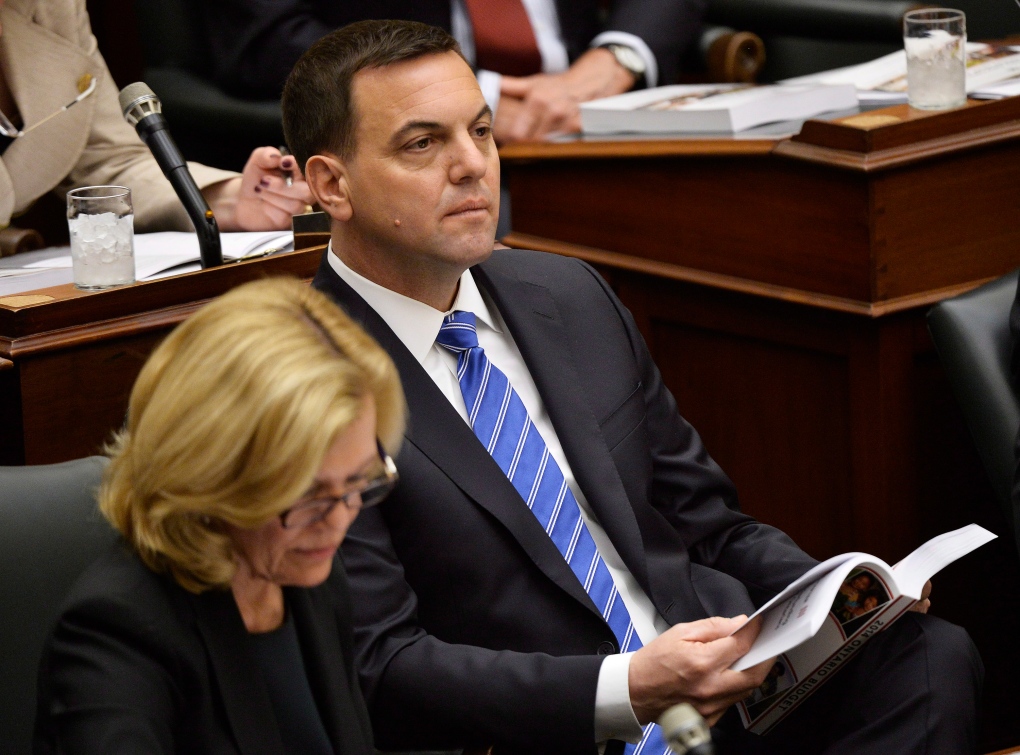 Conservative leader Tim Hudak listens to Ontario Finance Minister Charles Sousa, not shown deliver the 2014 budget next at Queen's Park in Toronto on Thursday, May 1, 2014.THE CANADIAN PRESS/Nathan Denette

TORONTO -- Ontario took a small step Friday to deal with the new sharing economy, announcing a pilot project with Airbnb to get users of the home-rental service to pay their taxes.

Airbnb agreed to email the 11,000 people in Ontario who list their homes or other spaces for rent on its site, telling them to report the income, and to educate them about consumer protection rights such as cancellations and refunds.

"While there's immense potential for Ontario to do well in the sharing economy, we need to make sure everyone is acting responsibly," said Finance Minister Charles Sousa. "We need to ensure consumers are being protected, accessibility requirements are being adhered to, and other regulatory and safety obligations are followed."

Airbnb said its 50,000 "hosts" across Canada earn an average of $280 a month from renting their homes for an average of 40 days a year.

One reason for the pilot project with Airbnb is the government wants to ensure fairness for all businesses in Ontario, said Sousa.

"While voluntary, the goal is to be compliant with Ontario's laws and regulations," he said.

Ontario wants to embrace the sharing economy, said Sousa, but the changes enabled by technology are making life difficult for existing businesses, such as traditional hotels which say they're losing money to Airbnb.

Progressive Conservative MPP Tim Hudak, who has a private member's bill that would make Uber, Airbnb and other services in the sharing economy legal in Ontario, said he welcomed the government's "tentative" step forward Friday.

"I think it's a good thing any time the Ontario government is talking about the potential benefits from the sharing economy," Hudak said in an interview. "I think the government could be a lot bolder, and I'd love to see Ontario be a leader in North America instead of trying to play catch-up."

Hudak said the government should combine his bill, which has already received second reading, with one from Liberal backbencher John Fraser that attempts to crack down on unlicensed taxis, to quickly deal with issues around the sharing economy.

"The sooner we get to the point of predictability and stability when to comes to Uber and Airbnb the better off we'll be in the province," he said.

Sousa said next week's provincial budget will include recommendations from an advisory committee set up last October to look into the sharing economy, which "has significant potential to create jobs and drive growth, productivity and innovation."