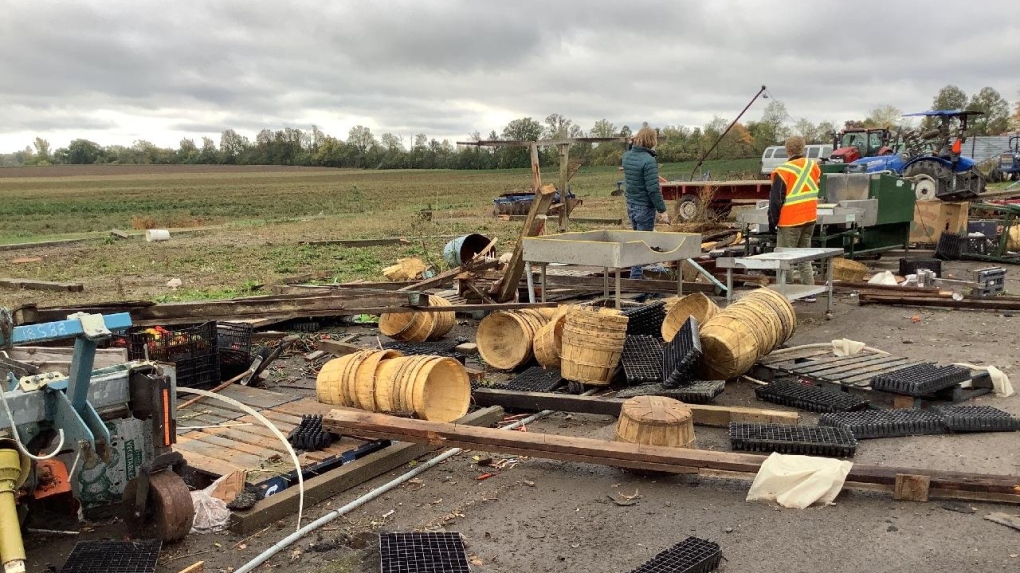 The aftermath of a tornado that touched down briefly near Hamilton. (@westernuNTP / Twitter)

KITCHENER -- The Northern Tornadoes Project was on scene assessing damage in the Hamilton area on Thursday morning and confirmed a brief EF-1 tornado touched down in Strabane.

The tornado moved through at around 4:30 p.m. on Wednesday, with maximum winds of 150 km/h. According to Environment Canada, the storm had a preliminary path length of about 700 metres, with a max width of 100 metres.

There were also 29 waterspouts confirmed over the Great Lakes Wednesday, a number that was confirmed by the International Centre for Waterspout Research.

Despite the active end of the month, September featured fairly calm conditions in Waterloo Region and surrounding communities. A little over 70 mm of rain was recorded over the month at the Region of Waterloo International Airport, but 31.6mm fell in the final three days of the month and 31.4 mm fell in the first week.

Fluctuations in temperature is typical for the fall season, and we have seen no shortage of swings in values so far.

Waterloo Region set two new record lows in September, before the fall season had even officially begun. On Sept. 15, the temperature dropped to 1.3 degrees Celsius breaking the previous record of 1.7 C set back in 1983.

Four days later on Sept. 19, the temperature dipped below the freezing mark at the local airport. That day's low of -2.6 C broke the previous daily record low of -1.1 C, recorded back in 1929.

The final weekend of September brought on summer-like conditions with temperatures in the mid-to-upper twenties. Although values to start October are on the chilly side, a slight rebound to near-seasonal values is expected in the long range.