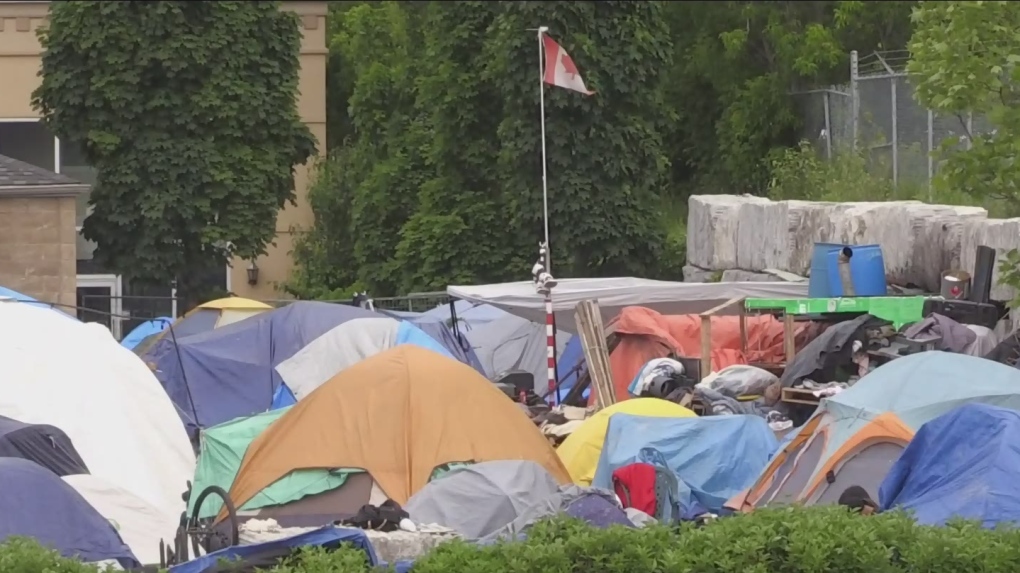 The Region of Waterloo has said there are over 60 tents and as many people at the encampment on Victoria Street in Kitchener. (CTV Kitchener)

Over the last several months, the encampment at the corner of Victoria and Weber Streets in Kitchener has undergone several changes, including an eviction day that came and went.

Since the makeshift encampment formed, it quickly grew to more than 60 tents.

Residents of the encampment, who successfully advocated to council for washroom access earlier this year, were handed down an eviction notice in early June with an end of the month deadline.

According to regional councillor Elizabeth Clarke, the plan has always been to vacate the encampment before the fall in order to make way for a transit project.

At the corner of Weber and Victoria Streets, the makeshift community started to slowly grow. On March 24, there were 14 tents housing nearly 20 people.

As the encampment grew, so did the call for access to basic human necessities, including washroom facilities.

In mid-April, it was estimated the encampment consisted of more than 30 tents.

Near the end of April, councillors approved a recommendation from staff to provide 24/7 access to washrooms for those living in the encampment.

The call for access to washroom facilities was a continuous request from those living in the encampment who said it was a basic necessity.

An eviction date of June 30 was set for residents of the homeless encampment.

The region posted a notice at the camp after saying the encampment has grown rapidly in the last few weeks and now had more than 50 tents.

Kitchener’s mayor, Berry Vrbanovic, said he was open to considering interim solutions while the Region of Waterloo worked to find permanent housing for those living at the encampment.

The region said no one would be forcibly removed from the site on the eviction day.

Instead, the region said it would ask the courts to decide what should happen next.

On eviction day, the encampment remained unmoved as those living there were joined by demonstrators who lined Victoria Street in front of the encampment.

On July 13, the Region of Waterloo filed court papers to remove the encampment.

As part of the process, the court has ordered the region to take extra steps to make sure encampment residents are aware of the process and can find representation.

The next day, free legal clinic representation was offered for those living at the encampment.

The first court date was set for July 20.

For the second time in less than a month, a resident of Ashcroft, B.C., died while waiting for health care.

Canadian home sales fall for 5th month in a row, down 29 per cent from last July

Canada's average resale home price fell 4.5% from a year ago in July and was down 5.4% on the month as buyers continued to sit on the sidelines amid rising borrowing costs.

British drug regulators have become the first in the world to authorize an updated version of Moderna's coronavirus vaccine that aims to protect against the original virus and the omicron variant.

A year after the Taliban seized control of Kabul, Canada's resettlement efforts have lagged behind official targets and the efforts to help those fleeing the war in Ukraine. More than 17,300 Afghans have arrived in Canada since last August compared to 71,800 Ukrainians who have come to Canada in 2022 alone.

Anne Heche, the Emmy-winning film and television actor whose dramatic Hollywood rise in the 1990s and accomplished career contrasted with personal chapters of turmoil, died of injuries from a fiery car crash. She was 53.

Padma Lakshmi is supporting her ex-husband Salman Rushdie in his recovery. The 'Top Chef' star tweeted Sunday that she is 'relieved' Rushdie is 'pulling through after Friday's nightmare' in which he was stabbed multiple times while on stage in New York.

Colonial Building in Newfoundland won't be renamed after all: provincial government

The Newfoundland and Labrador government says it will not be changing the name of the Colonial Building in downtown St. John's.

About 4,000 beagles are looking for homes after animal rescue organizations started removing them from a Virginia facility that bred them to be sold to laboratories for drug experiments.