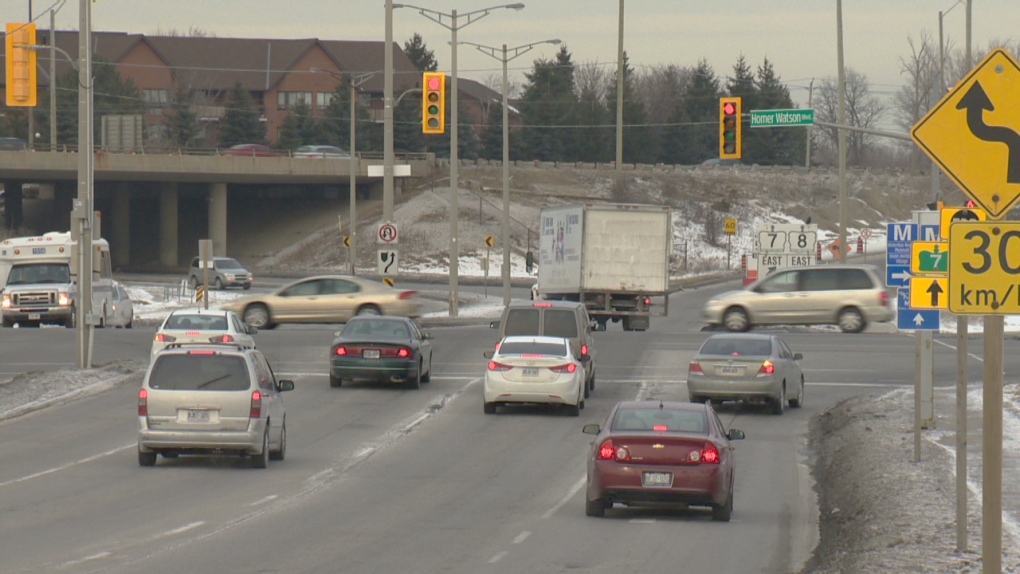 Traffic stops for a red light at Ottawa Street and Homer Watson Boulevard on Wednesday, Jan. 21, 2015.

As regional councillors took a look at Waterloo Region’s most dangerous intersections of 2014 this week, they also got a report on what action had been taken about or planned for 2013’s most crash-prone corners.

Detailed here is that 2013 list, along with the number of collisions reported at the time and what changes have been suggested to make the intersection safer.

What’s being done? Roundabout to be installed in 2016 or 2017, along with a second roundabout at Ottawa Street and Alpine road, and changes to the on-ramps and off-ramps at Highway 7/8. While the total number of collisions may increase, transportation planners expect far fewer of those collisions to result in injuries.

What’s being done? Traffic light controls were modified in 2012 to allow a dual left-turn phase. Since then, there have been no collisions caused by drivers making westbound left turns (compared to 31 in the previous five years). A roundabout could be installed, but has not been approved.

What’s being done? Almost 70% of collisions at this intersection are of the rear-end variety. The majority of those are caused by inattentive drivers. High-friction asphalt may be installed as a counter-measure.

What’s being done? A red light camera and countdown pedestrian signals were installed in2008, followed by ladder crosswalks in 2013. A roundabout or dual left-turn lanes could be considered as well.

What’s being done? Construction of a roundabout started in July, and is expected to be finished by next summer.

What’s being done? Changes to traffic light patterns are expected to reduce the number of left-turn crashes, which currently account for about 20 per cent of all collisions. A second southbound left turn lane and second northbound left-turn lane are being considered as well.

What’s being done? Construction will start in 2016 on significant changes to the intersection, including a widening of the road to allow for new through and turning lanes.

What’s being done? Officials will study the possibility of lengthening left-turn lanes northbound and southbound along Hespeler, and changing traffic signals to allow better protection for turning vehicles.

What’s being done? Planners will study potentially widening the intersection and installing a second left-turn lane for southbound traffic, although no actual changes are expected until 2021.