$720K in damage after workshop burns in Norfolk County 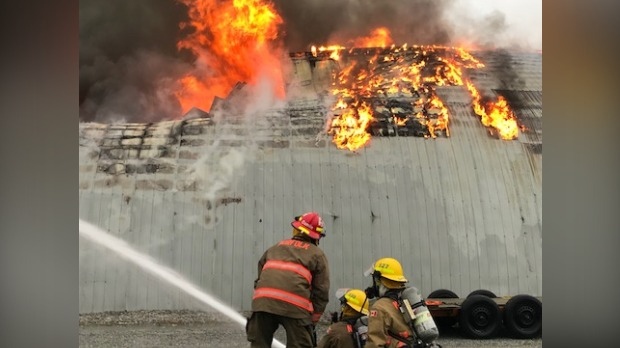 Fire crews were able to stop a workshop fire from spreading to three nearby turkey barns. (Source: Michael Atkins)

KITCHENER – A workshop in Norfolk County had to be demolished after a fire in Waterford, but firefighters from five stations were able to stop it from spreading to three nearby turkey barns.

County officials say that the fire department was dispatched shortly after 8 a.m. Tuesday to an address on Villa Nova Road after a passerby called 911 and reported seeing smoke.

"It's my understanding that a neighbour was passing the property when he noticed smoke coming from the shop and called 911," Prevention Officer Michael Atkins is quoted in a news release.

When crews arrived, they began a defensive fight in an effort to keep the turkey barns from catching. Their efforts were successful, but the workshop couldn't be saved.

"Unfortunately, the building was a complete loss. We had to bring in an excavator to help firefighters get access to burning materials located beneath the metal sheeting after a large portion of the building collapsed from the fire," Atkins is quoted as saying.

There were no injuries and the fire is not being considered suspicious.

The property owners told firefighters that there were no losses of turkey, either.

Still, the workshop and its contents, which included a number of vehicles, were destroyed, with a damage estimate totaling $720,000.

The Ontario Fire Marshal's Office was called, as is protocol on incidents where damage is over $500,000.

Fire officials say that the building was insured but its contents were not.