50-car crash shuts down 401 near Woodstock

As many as 50 vehicles, including several tractor-trailers, were involved in a collision that shut down Highway 401 eastbound between Ingersoll and Woodstock.

The crash happened shortly after noon Friday near the Foldens Line exit. As of 5:30 p.m., the highway had yet to reopen.

An air ambulance was initially dispatched to the scene but quickly called off due to weather. Police say injuries are believed to be minor.

"We're very lucky to report that it could have been a lot worse," said OPP Sgt. Dave Rektor.

Whiteouts and snow squalls were reported in the area around the time of the crash, and police say drivers not adapting to the conditions is the likely cause of the crash.

“We have people driving into the scene in highway speeds, when you can’t see anything in front of you,” said Rektor.

Witnesses say there was thick blowing snow in the area and many drivers were unable to stop safely, causing a chain-reaction collision.

The aftermath of the collision stretched down the 401 for 1.5 kilometres . 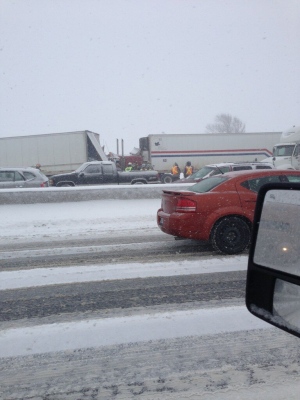 See photos of the crash.