Waterloo regional police say they responded to an increasing amount of gun violence over the spring of 2022.

“We saw two years in the pandemic where we did see a decline in shootings. But post pandemic, once again we’re reaching pre-2020 levels,” Larkin said in an interview with CTV News on June 16.

Two shootings in the space of a few hours on June 16 promoted a message from Larkin condemning the crimes.

There were 16 shootings in Waterloo region last year. Larkin said we’ll likely surpass that number by the end of 2022.

This list includes shootings, in addition to other firearm-related incidents reported by police.

Cases where the gun involved was confirmed to be a BB gun, airsoft gun or replica are not included.

Sept. 22: One person is transported to hospital after a shooting in the Weber Street and Kinzie Avenue area of Kitchener.

Sept. 15: Officers are called to Kitchener’s Southdale area for reports of a shooting. When they arrive, they find a 24-year-old man with gunshot wounds. Neighbours tell CTV News they’re shaken.

Aug. 23: A man is transported to hospital with non-life-threatening injuries after a shooting in Kitchener.

Aug. 7: Waterloo regional police investigate a shooting they say resulted in one person getting hurt.

Aug. 4: A 34-year-old Waterloo man is arrested and charged after police seize multiple weapons including guns, Tasers and crossbows.

July 12: Police say a person posing as a Canada Post worker during an attempted home invasion brandishes a handgun during the incident.

June 25: Police find evidence a gun was fired in the Avalon Place area of Kitchener. Officers believe it happened shortly after a collision in the area and the two incidents are connected.

June 16: Shots are fired in the area of Belmont Avenue West and Karn Street in Kitchener around 12:30 a.m. Around 3 a.m. more gunshots are reported near Fairview Park Mall. No injuries are reported from either incident.

June 5: Two people are arrested after gunshots are reported near Kitchener’s Chicopee neighbourhood. No injuries are reported.

May 29: Residents in Kitchener’s Park Street and Glasgow Street area are awoken by gunshots. A witness tells CTV News they saw two people, one of them was wearing a black ski mask. After the gun was fired they sped off in car, the witness says. No injuries are reported.

May 25: A store in Conestoga Mall in Waterloo is robbed at gunpoint. No one is injured. Police initially say they’re looking for three men. Two teens are arrested the next day. Police say a 9 mm handgun is found inside their vehicle at the time of arrest. No details are released about the third suspect.

May 23: Shots are fired at McLennan Park in Kitchener as a group of people set off fireworks on Victoria Day. Police say a short time later a second set of shots is fired at a home in the nearby area of Windflower Drive and Windflower Crescent in Kitchener, damaging a wall and a couch.

May 21: A Cambridge man is arrested and charged after allegedly brandishing a firearm during a dispute in the area of Elgin Street North and Alison Avenue.

May 9: Gunfire is reported in downtown Kitchener. No injuries are reported. 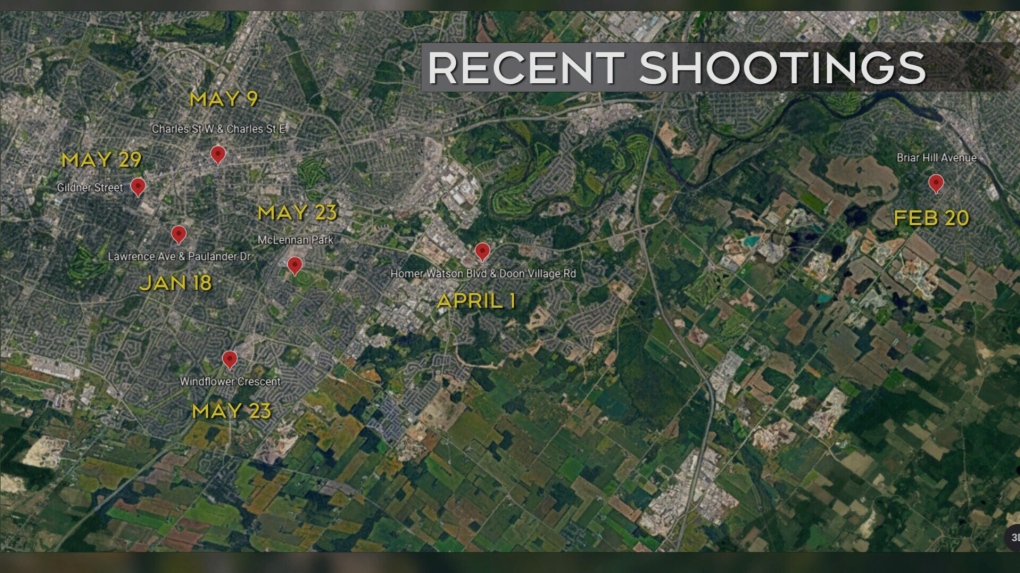 Police say there have been seven shootings in Waterloo Region so far this year, as of May 30. (Source: Waterloo Regional Police Service, Graphic by: Tory Galick/CTV Kitchener)

April 1: Police investigate a shooting in Kitchener's south end. No injuries are reported.

March 20: Police receive reports of a passenger in a vehicle in the King Street East and Frederick Street area of Kitchener displaying a handgun.

March 19: Multiple people in Kitchener’s West Avenue and Homewood Avenue area are awoken by the sound of a gunshot. Police find a single 9 mm brass casing on the road. No injuries are reported

In a separate incident, police say a man is assaulted with a gun in the King Street East and Fairway Road North area of Kitchener.

Feb. 20: A 46-year-old man is shot and killed in the area of Cedar Street in Cambridge. Police arrest a 17-year-old boy four days later and charge him with first-degree murder.

Jan. 18: Police investigate reports of property damage in the area of Paulander Drive and Lawrence Avenue in Kitchener. Investigation determines damage to the front door of a home was caused by a bullet. No injuries are reported.

Jan. 15: A man with a gun enters a Cambridge gas station and makes off with an undisclosed amount of money. No injuries are reported.