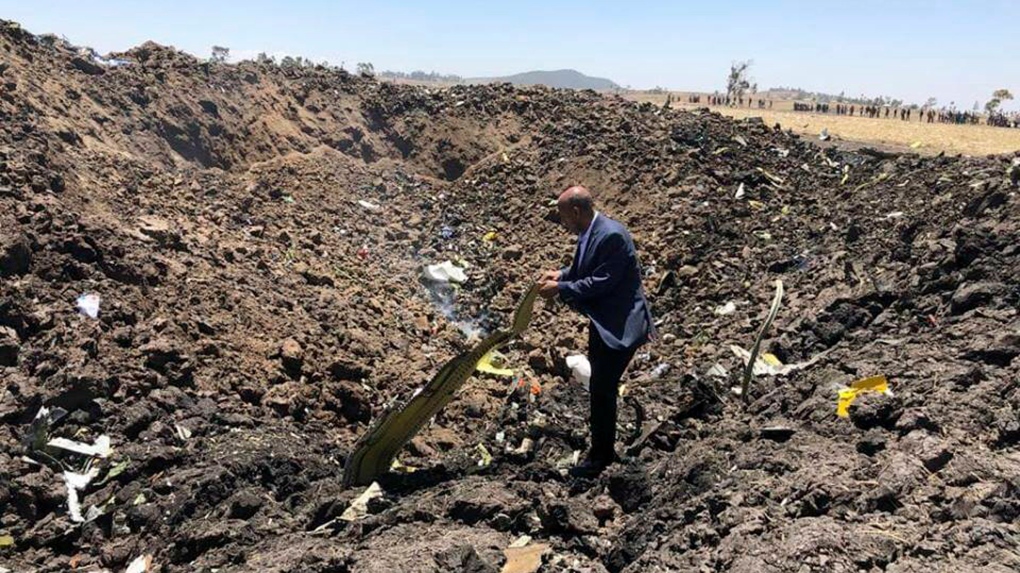 In this photo taken from the Ethiopian Airlines Facebook page, the CEO of Ethiopian Airlines, Tewolde Gebremariam, looks at the wreckage of the plane that crashed shortly after takeoff from Addis Ababa, Ethiopia, Sunday March 10, 2019. (Facebook via AP)

Prime Minister Justin Trudeau says his thoughts are with the victims of a deadly Ethiopian Airlines crash today, including the 18 Canadians on board.

They are among the victims of a crash that killed all 157 people thought to be on board today.

In a tweet today, Trudeau calls the crash devastating news and says thoughts are with all the victims, including the Canadians, and everyone who lost friends, family or loved ones.

It is not yet clear what caused the crash of the new Boeing 737-8 MAX plane shortly after takeoff from Bole Airport en route to Kenya's capital, Nairobi.

The airline's CEO says the pilot sent out a distress call and was given clearance to return.

The victims also include 32 Kenyans, nine Ethiopians, eight people each from the United States, China and Italy, seven each from France and Britain, and six from Egypt.

"My heartfelt condolences to all those who have lost loved ones," she wrote on Twitter. "The Canadian government is in close contact with Ethiopian authorities to gather additional information as quickly as possible."

It is not yet clear what caused the crash of new Boeing 737-8 MAX plane shortly after takeoff from Bole Airport en route to Kenya's capital, Nairobi. The pilot sent out a distress call and was given clearance to return, the airline's CEO said.

It is likely the plane was carrying people set to attend a major United Nations environmental conference in Nairobi. The U.N. Environment Assembly is set to begin on Monday in Kenya's capital, where the plane was headed. U.N. Environment has said more than 4,700 heads of state, ministers, business leaders and others would attend.

The plane was new and had been delivered to the airline in November, records show.

The state-owned Ethiopian Airlines, widely considered the best-managed airline in Africa, calls itself Africa's largest carrier and has ambitions of becoming the gateway to the continent.

It said 149 passengers and eight crew members were thought to be on the plane that crashed six minutes after departing Addis Ababa on its way to Kenya's capital. The crash occurred around Bishoftu, or Debre Zeit, some 50 kilometres south of Addis Ababa, at 8:44 a.m.

The airline later published a photo that appeared to show its CEO standing in the wreckage. Little of the plane could be seen in the freshly churned earth, under a blue sky.

"Tewolde Gebremariam, who is at the accident scene now, regrets to confirm that there are no survivors," the post on social media said. "He expresses his profound sympathy and condolences to the families and loved ones of passengers and crew who lost their lives in this tragic accident."

State broadcaster EBC reported all passengers were dead and that they included 33 nationalities. The Ethiopian prime minister's office offered its "deepest condolences" to families.

The Addis Ababa-Nairobi route links East Africa's two largest economic powers and is popular with tourists making their way to safari and other destinations. Sunburned travellers and tour groups crowd the Addis Ababa airport's waiting areas, along with businessmen from China and elsewhere.

At the airport in Nairobi, worried families gathered.

"I came to the airport to receive my brother but I have been told there is a problem," Agnes Muilu said. "I just pray that he is safe or he was not on it."

"Why are they taking us round and round, it is all over the news that the plane crashed," said Edwin Ong'undi, who had been waiting for his sister. "All we are asking for is information to know about their fate."

Kenya's transport minister, James Macharia, said an emergency response had been set up for family and friends.

"My prayers go to all the families and associates of those on board," Kenya's President Uhuru Kenyatta said.

Records show that the plane was new. The Planespotters civil aviation database shows that the Boeing 737-8 MAX was delivered to Ethiopian Airlines in mid-November.

In a statement, Boeing said it was "deeply saddened" to hear of the crash and that a technical team was ready to provide assistance at the request of the U.S. National Transportation Safety Board.

In October, another Boeing 737-8 MAX plunged into the Java Sea just minutes after taking off from Jakarta, Indonesia's capital, killing all 189 people on board the plane Lion Air flight. The cockpit data recorder showed that the jet's airspeed indicator had malfunctioned on its last four flights, though Lion Air initially claimed that problems with the aircraft had been fixed.

The last deadly crash of an Ethiopian Airlines passenger plane was in 2010, when the plane crashed minutes after takeoff from Beirut killing all 90 people on board.

Sunday's crash comes as the country's reformist prime minister, Abiy Ahmed, has vowed to open up the airline and other sectors to foreign investment in a major transformation of the state-centred economy.

Ethiopian Airlines has been expanding assertively, recently opening a route to Moscow and in January inaugurating a new passenger terminal in Addis Ababa to triple capacity.

Speaking at the inauguration, the prime minister challenged the airline to build a new "Airport City" terminal in Bishoftu -- where Sunday's crash occurred.