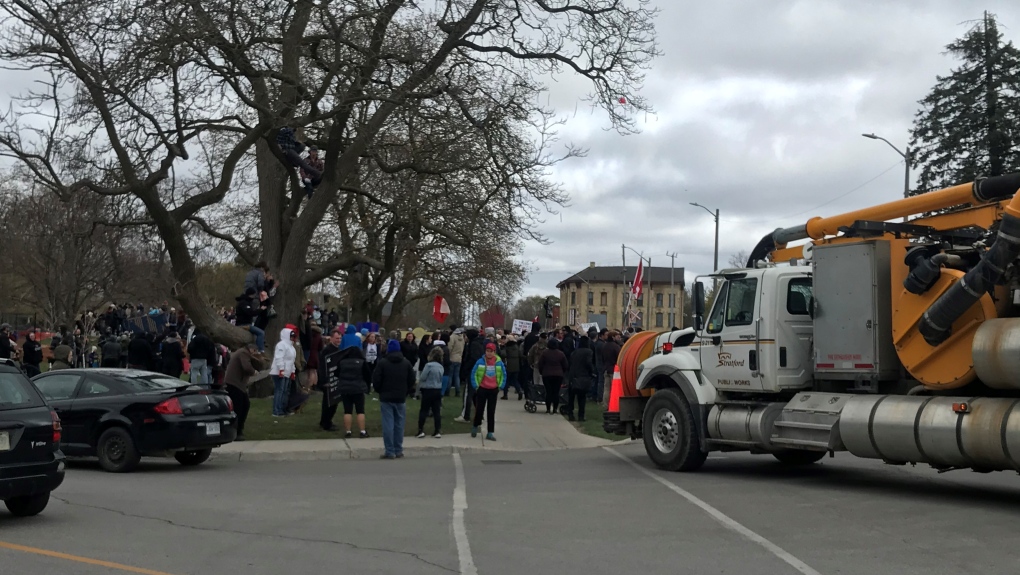 Hundreds gathered in Stratford on Sunday afternoon for an anti-lockdown rally.

STRATFORD -- Stratford police have charged 14 people in connection with a late-April "No More Lockdowns" anti-restrictions rally that drew more than 700 protestors.

On Monday, Stratford police announced 14 individuals have been charged with failing to comply with an order made during a declared emergency related to COVID-19 enforcement measures under the Emergency Management and Civil Protection Act.

Of the 14 people charged, most were either speakers at the protest or rally organizers. One other person, who officials said was being aggressive during the protest, was also charged.

The April 25 protest, organized by No More Lockdowns Canada, was originally slated to be held at Lower Queens Park in Stratford. The city, along with police, barricaded the streets surrounding the area, causing organizers of the event to move to the corner of Downie and Shakespeare Streets, near the city's skate park.

Stratford police said the event was "peaceful in nature, with only a few exceptions."

It is not confirmed at this time if any of these people were charged, as police have not released the names of any of the people charged in connection to the rally, but confirmed most were from outside the Stratford community.

"Of the 14 people who were charged, there were only three who were residents of our area," said Const. Darren Fischer.

All of the accused are expected to appear in court June 22.

Early April, Ontario issued a stay-at-home order that directed individuals to remain at home with few exceptions. Outdoor gatherings have been capped at 10 people.

That order is still in effect until June 2.