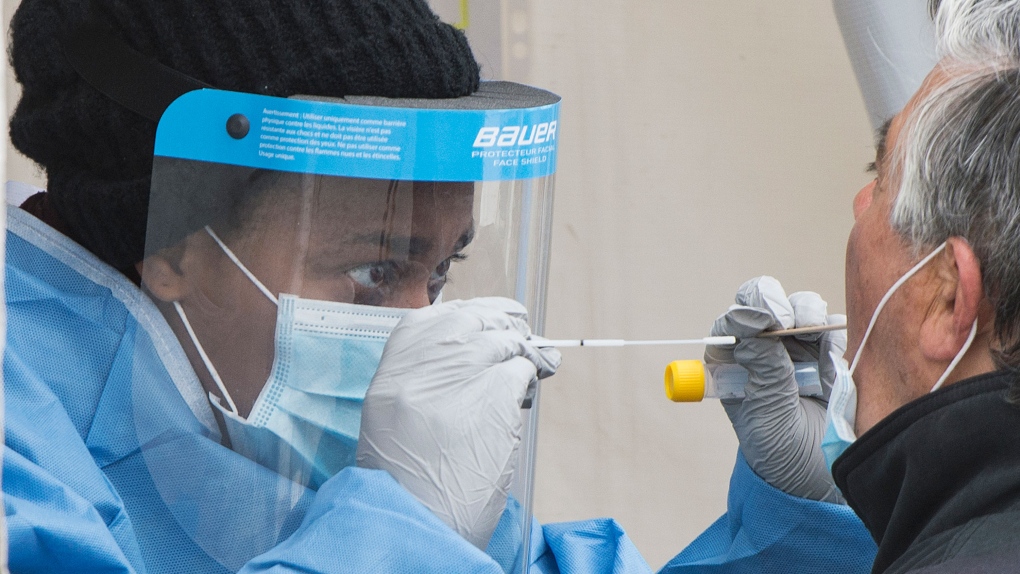 A health-care worker prepares to swab a man at a walk-in COVID-19 test clinic in Montreal North, Sunday, May 10, 2020. The number of Quebecers in hospital due to COVID-19 continues to drop as the province added 33 new deaths due to the virust today. THE CANADIAN PRESS/Graham Hughes
KITCHENER -

The Region of Waterloo reported 10 new COVID-19 cases on Sunday, as well as three new outbreaks.

Since the start of the pandemic there has been 18,401 confirmed infections across the region.

Hospitalizations remain unchanged with 16 patients receiving medical treatment, and 11 of those are currently in the intensive care unit.

Two more cases have also been added to the region’s Delta variant total.

The variant breakdown for Sunday is as follows:

They’ve only been identified as a food processing business, automotive supply business and a property management company.

There are currently nine outbreaks in Waterloo Region.

That’s the fourth day in a row new infections have topped the 200 mark.

Health officials also say two more deaths have been linked to the disease.

Ontario will not release any new COVID-19 updates on Monday due to it being a holiday.

Huawei Technologies Chief Financial Officer Meng Wanzhou is expected to appear virtually in federal court to resolve U.S. charges against her, according to a source familiar with the situation.

Long-term care outbreaks are rising, and provinces have different strategies for keeping COVID-19 out

As the fourth wave continues across Canada and community spread climbs, outbreaks are also on the rise inside Canada’s long-term care homes, leading experts to stress the importance of staff being vaccinated — an issue which varies province to province.

Sask. health-care workers on the brink of being overwhelmed as COVID-19 ICU cases climb

Inside hospitals across Saskatchewan, which has one of the lowest vaccination rates in the country, health-care workers are reporting a worsening crisis, with record-breaking COVID-19 hospitalizations pushing the health-care system to the brink.

Canadian fashion model Linda Evangelista says she's been left 'permanently deformed' from a cosmetic procedure that she had approximately five years ago.

Ten months after Donald Trump lost his 2020 reelection bid in Arizona, supporters hired by Arizona Senate Republicans were preparing to deliver the results of an unprecedented partisan election review that is the climax of a bizarre quest to find evidence supporting the former president's false claim that he lost because of fraud.

The U.S. Centers for Disease Control and Prevention on Thursday endorsed booster shots for millions of older or otherwise vulnerable Americans, opening a major new phase in the U.S vaccination drive against COVID-19.

A source close to the family of Brian Laundrie says Gabby Petito's fiance, who is now the subject of a federal warrant, left his parents' Florida home last Tuesday without his cell phone and wallet.